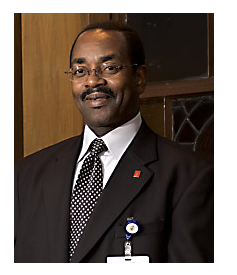 As a chaplain of the Islamic faith, I am particularly sensitive to the needs of patients and family members of Middle Eastern descent. The grieving process of many of these family members is different from other religions and cultures. Many wail and scream out. Because I handle that kind of trauma well, the hospital calls me whenever there’s a highly-charged situation.
I recall a patient I was asked to help with recently—a male in his sixties from Palestine. He had ten adult children, and on the day he died, one of his daughters began beating her head on the floor until it bled. Other children were screaming in the hallways, including one who had a birthday that day. There were about fifty family members present, and all of them were trying to cope in their own way with their terrible loss. I was able to be there for this family, emotionally speaking, to help them express their feelings about what had just happened to them.
Another time I was able to bring comfort to a fourteen-year-old boy from Yemen who was dying of cancer, as well as to his mother, who was distraught about her son. The family had traveled to England and Australia, hoping for a cure, and then doctors in the U.S. had told them nothing could be done. This news so upset and angered the father that he returned to Yemen with their daughter, leaving the mother and her sick son to face death alone in a foreign country.
I work well with adolescents. I listen to them, and I understand them. This boy spoke very good English, which was very helpful. I stopped in every day to see him, and we talked about everything kids like to talk about, including basketball. We developed a very good rapport, and our connection felt mutual.
Then one day, this young man suddenly raised a much more serious topic. ‘Imam, I know I’m dying,’ he said, ‘and I need for you to do one thing for me. Help my mother regain her faith so that I can meet her again in paradise.’ Of course, I obliged. We began praying with that in mind—loud enough for his mother, who was standing in the hallway, to hear.
At first the mother refused to join in the prayer. But over the course of a few weeks she eventually joined us in prayer one day. I glanced at the boy, who had been in such agony for so long, and as he looked up at me, I saw a young man who was healed—spiritually healed, though sadly not cured. His mother shared in the healing. After her son died, she called me to say that she had regained her faith.
When patients are first diagnosed and get the prognosis, many start thinking about God. If the chaplain is brought into the situation early on, it’s better for everyone concerned—patients, their families, and the staff. Patients know they can say anything they want to me, because they know I’ll keep their feelings and our conversations confidential. For this reason, I think the chaplain is not only one of the most trusted on the healthcare team, but also the one most likely to help the patient heal in ways that others cannot.

HealthCare Chaplaincy Network™ (HCCN), founded in 1961, is a global health care nonprofit organization that offers spiritual care-related information and resources, and professional chaplaincy services in hospitals, other health care settings, and online. Its mission is to advance the integration of spiritual care in health care through clinical practice, research and education in order to improve patient experience and satisfaction and to help people faced with illness and grief find comfort and meaning – whoever they are, whatever they believe, wherever they are.